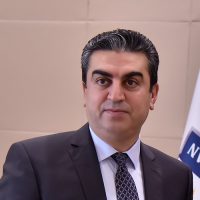 Former Governor Farhad Atrushi was sworn in as Governor of Duhok in June 2014, serving in this post until 2020. The Governor previously served as a member of the Iraqi Council of Representatives (Parliament) from 2010 to 2014, during which he was a member of the Oil and Gas Committee. He lectured at the College of Law and Politics, University of Duhok (2006-10) and served as Deputy Head of the Law School at Nawroz University in Duhok (2004-6). In 2001, he was lectured on Constitutional Law (political systems and human rights) at the Law School of the International Islamic University in Malaysia.

Mr. Atrushi holds a Master’s degree from the International Islamic University of Malaysia in political sciences, majoring in international relations and foreign policy.