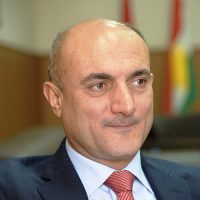 Minister Ali Sindi is a medical doctor and a specialized surgeon. He has been the Minister of Planning of the Kurdistan Regional Government (KRG) since October 2009. He has also been the Acting Minister of Trade and Industry for KRG since October 2015. Prior to this, he served in the role of senior advisor to the Prime Minister of the KRG in 2002-2009 and served as Deputy Minister of Health and Social Affairs for KRG in 1996-2001.