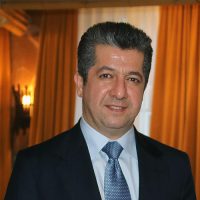 Chairman of the Board of Trustees

H.E. Masrour Barzani is the founder of the American University of Kurdistan. He was nominated by the Kurdistan Democratic Party as the Prime Minister of the Kurdistan Regional Government, after the landslide victory of his party at the parliamentary election on September 30, 2018. He was appointed Chancellor of the Kurdistan Region Security Council in 2012. Prior to that, H.E. Barzani served as the General Director of the Protection and Intelligence Agency.

H.E. Barzani joined the Peshmerga in 1985 at the age of 16. He was an active participant in the ongoing battle against Saddam Hussein until the Kurdish uprising in 1991. As the Chancellor of the Kurdistan Region Security Council, he was at the forefront of the battle against ISIS from 2014 to 2017.

H.E. Barzani has been an advocate of women’s empowerment and under his stewardship, women were officially added to the Kurdish security services. In 2005, he founded the Barzani Charity Foundation, a non-profit charity organization that provides aid to the internally displaced, refugees and other vulnerable populations. The Foundation is modeled on the life, struggle and principles of his Grandfather Mustafa Barzani, the founding father of Kurdistan.

H.E. Barzani holds a B.A. in International Studies (with honors) from the American University in Washington, D.C. His postgraduate studies focused on peace and conflict resolution. He has published op-eds in the Washington Post.