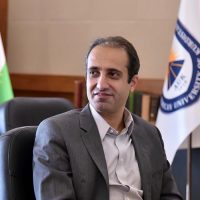 Dr. Honar Issa has been engaged with The American University of Kurdistan (AUK) since its establishment in 2014. He served as the first ever Provost of AUK during 2016-2017. Prior to that, he served as a Member of the Board of Trustees at AUK and led the establishment phase of the University during 2013-2016. He was the Founding Dean of Engineering at Soran University – Kurdistan Region in 2012-2013.

Dr. Issa has also taught various structural engineering subjects at the University of Duhok – Kurdistan Region in 2015-2018, University of Salahaddin – Kurdistan Region in 2012-2013 and 2004-2006, and Nottingham Trent University in the UK in 2007-2011. His research interests are Structural Optimization and Bio-Mechanics. He has published articles, scientific papers, and op-eds in various reputable national and international journals and websites. Dr. Issa has been a keynote speaker in various international conferences across the globe. He is one of the founders of the Kurdistan-America Student Friendship Association in 2003, while acting as Chair of the Governing Board. He is one of the founding members of AUK’s Board of Trustees where he played an instrumental role in bringing the university into existence.