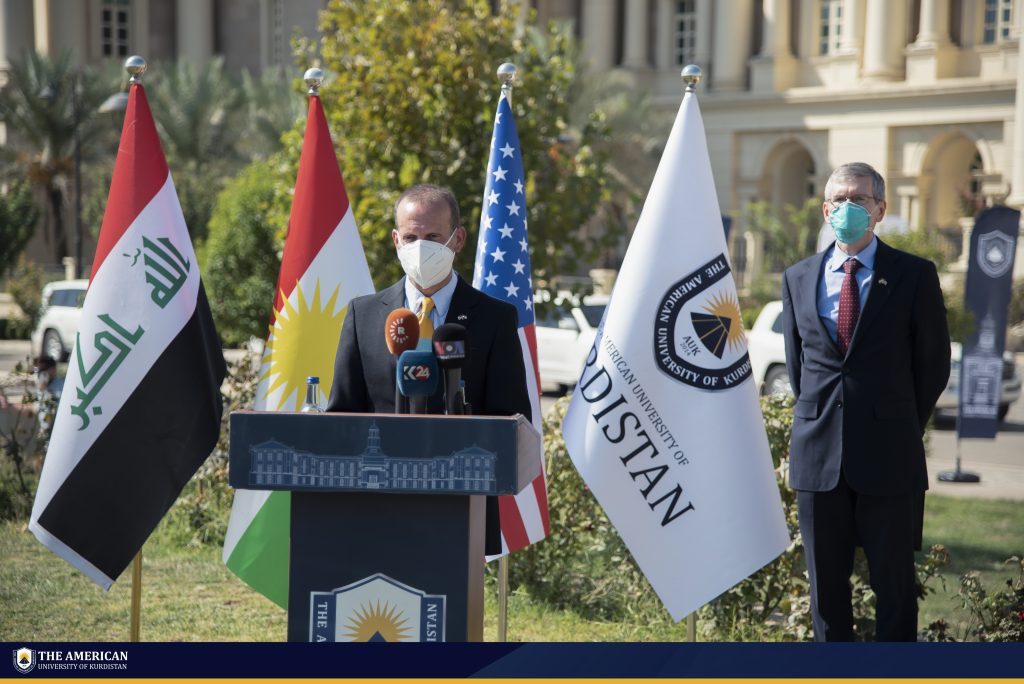 Duhok, Kurdistan Region – October 12th – U.S. Consul General to Kurdistan Region, Rob Waller, and President of The American University of Kurdistan (AUK), Dr. Randall Rhodes, announced the successful award of a $4 million grant to AUK within a press conference at the Mustafa Barzani Campus. The grant has been awarded to AUK mainly to support American-Style Higher Education in Iraq.

“I would like to thank the U.S. Government and the American people for awarding AUK with the needed support to develop its U.S.-based partnerships and expand scholarship opportunities for a broader sector of the local population,” stated Dr. Rhodes “I would also like to acknowledge the role of AUK’s Secretary of Board of Trustees, Dr. Honar Issa, who has been able to successfully conceptualize, negotiate and draft the successful grant proposal with the support of Dr. Lee Bash, Chief Accreditation Consultant for AUK and our Deans,” AUK’s President added.

The project’s main objectives are to support AUK’s accreditation initiatives, establish partnerships with U.S. universities, and support student services with a special emphasis on access and inclusion.

The grant will offer dozens of scholarships for newly enrolled students at AUK, prioritizing women, students from minority groups, and vulnerable populations.

The award will also provide AUK with the needed support to develop its U.S.-based partnerships and initiate required changes to achieve U.S. accreditation. As well as establishing partnerships with U.S. universities through faculty and staff mobilities and the sharing

“The funds will go towards training, mentoring, and research programs, as AUK is now partnered with six top-tier universities in the United States,” stated Rob Waller, U.S. Consul General to Erbil.

The American University of Kurdistan’s mission is to combine the best of American-style liberal arts and professional education to produce graduates with global perspectives who are fully engaged in the region’s advancement.