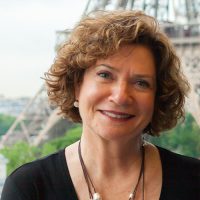 Dr. Celeste Schenck, the twelfth president of The American University of Paris, was formerly its Provost and Dean, as well as a Professor of Comparative Literature. She received her BA from Princeton University and her PhD from Brown University, edited two international series, Reading Women Writing and the Barnard New Women Poets Prize, and published widely on women’s autobiography and poetry, critical theory, international development, and educational and pedagogical issues.

A leader in global higher education, Dr. Schenck founded AMICAL in 2004, a consortium of American universities across Europe, the Middle East, Central Asia and North Africa that holds in common the mission of sharing resources, technologies, curricular projects and faculty and student exchanges across 29 institutions, 21 countries, and 19 languages. She has also served as president of AAICU (Association of American International Colleges and Universities), a presidents’ organization spanning American-style universities across the world. The President of The American University of Paris since 2008, she currently writes and speaks on issues of international higher education, global liberal arts, and women’s leadership.