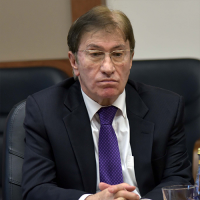 Ambassador Ismat Siddiq is a retired Iraqi ambassador. During his career, spanning 42 years in the diplomatic service, he served in numerous diplomatic roles and diplomatic missions overseas. Ambassador Siddiq served as the Iraqi Consul General to Dubai, U.A.E (2004-8, 2011-15). He served as the Head of the Consular Department at the Iraqi Ministry of Foreign Affairs (2010-11). Prior to that, he worked at the Iraqi Deputy Prime Minister’s Office (2009-10).

From 1999 to 2003, Ambassador Siddiq served as Senior Advisor to the Minister of Humanitarian Affairs for the Kurdistan Regional Government. He was a member of Administration Board at the Kurdistan Reconstruction Organization (1990-92), and served as its representative to Turkey (1992-95).

Ambassador Siddiq holds a B.A. in English Literature from the University of Baghdad. He graduated from the Diplomatic Institute of the Iraqi Ministry of Foreign Affairs in 1982.