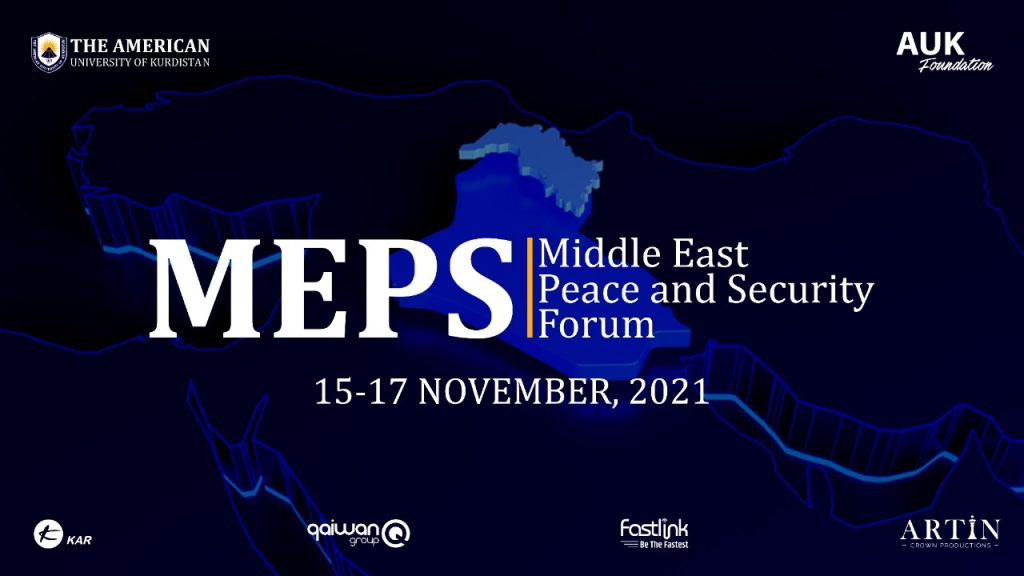 Duhok, Kurdistan Region of Iraq – November 11th, 2019 – The American University of Kurdistan (AUK) is holding the second Middle East Peace & Security (MEPS) Forum entitled “THE MIDDLE EAST IN TRANSITION: WINNING & KEEPING THE PEACE”, from November 15 to 17, with the AUK Foundation (AUKF) as the main organizer.

The three-day MEPS Forum will include three workshops and nine panels attended by heads of state, ministers, and leading personalities from international and non-governmental organizations, debating the Middle East’s most pressing political, socio-economic and security issues.

On Day One, more than ninety regional and international scholars, thought-leaders and decision-makers will be divided across three simultaneous workshops, providing a platform for rigorous debate and critical thinking, as well as actionable policy recommendations.

The workshops will be partnered with the Middle East Institute, Iraq Policy Group, Carnegie Corporation of New York, Crisis Response Council (CRC), and the United States Institute of Pea.

As the host of MEPS Forum 2021, AUKF’s mission is to support the University in achieving its educational objectives, and thereby play its part in providing a transformational life experience for the new generation.

In 2019, AUK assembled more than 150 high-profile decision-makers, scholars, experts and thought-leaders from around the world (heads of state, ministers, leading personalities from international and non-governmental organizations, high-ranking representatives of industry, media, academia and civil society) to engage in an intensive debate. MEPS Forum 2019 hosted workshops on the sidelines of the main forum, as part of its belief in rigorous debate and actionable policy analysis that can illuminate pathways for regional stability.

This is year’s event will be held under COVID-19 restrictions and in compliance with the health regulations of the Kurdistan Regional Government.

Join us directly via Twitter (@MEPSForum) and other social media platforms by using our hashtag: