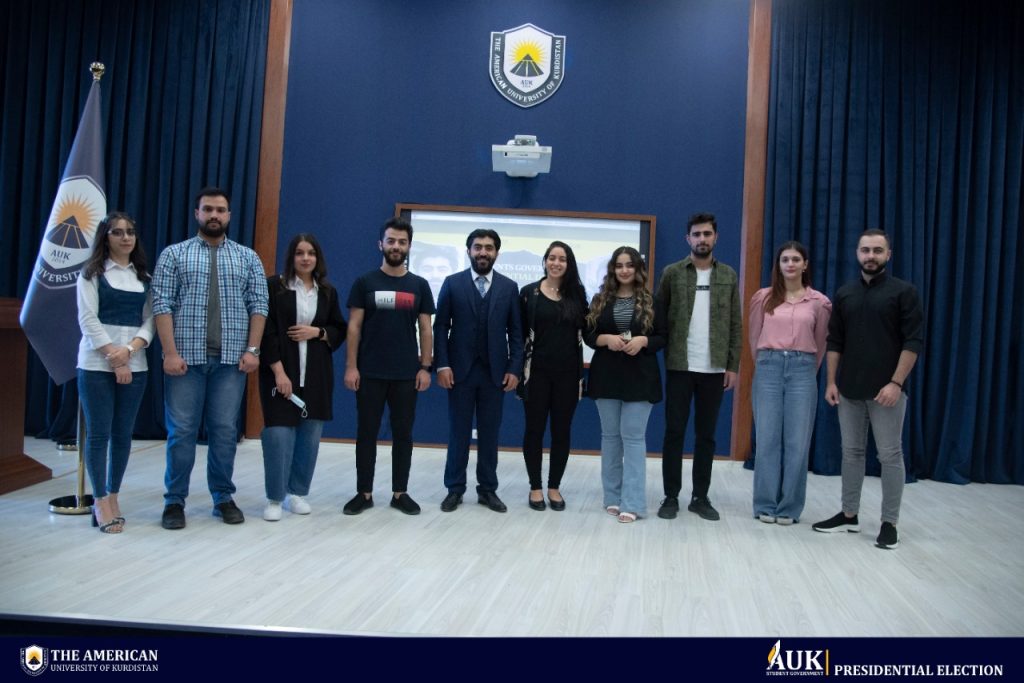 Duhok, Kurdistan Region– September 28th, 2021- Students of the American University of Kurdistan cast their votes to elect the new President of Student Government (SG) to complete the formation of the fourth cabinet.

To ensure this year’s Student Government’s efficiency, impact, and success, students were invited to apply for respective positions. A screening process included selection by an impartial committee, in where a thorough application process assessed the applicant’s leadership capability, experience, student engagement capacity, and more. In order to ensure student engagement in this process, elections were held for the president’s position.

On September 27th, nearly four hundred students, making around 60 % of the entire student population at AUK, voted at the polling station inside AUK’s auditorium, where the ballot box was placed, to vote for their presidential candidate.

The election ballots were open for five hours, starting from 10:00 am until 2 pm. The voting and counting process was monitored by Ms. Nadine Aldahleh, AUK’s Manager of Student Affairs, and a five-headed jury from staff and faculty members.

“I am very proud of our student body and the high voting turnout. Now that our President is elected, the student government will convene and begin activities, clubs, and initiatives on campus,” stated Ms. Nadine. “I am looking forward to an exciting year ahead!” she added.

After a public counting and filtration process for the votes in the auditorium from 2:00 pm – 3:00 pm, Belend Kamal, with 201 votes, was announced the winner of the 2021/2022 SG elections and the new President of AUK’s Student Government.

“It’s an honor to be representing AUK students and a pleasure to be of service as the president of the 4th cabinet of the Student Government,” said Belend proudly and added,” I want students to focus on education, without losing the excitement for social, sports and fun activities on campus.”

Joining the elected President in the new SG cabinet will be: