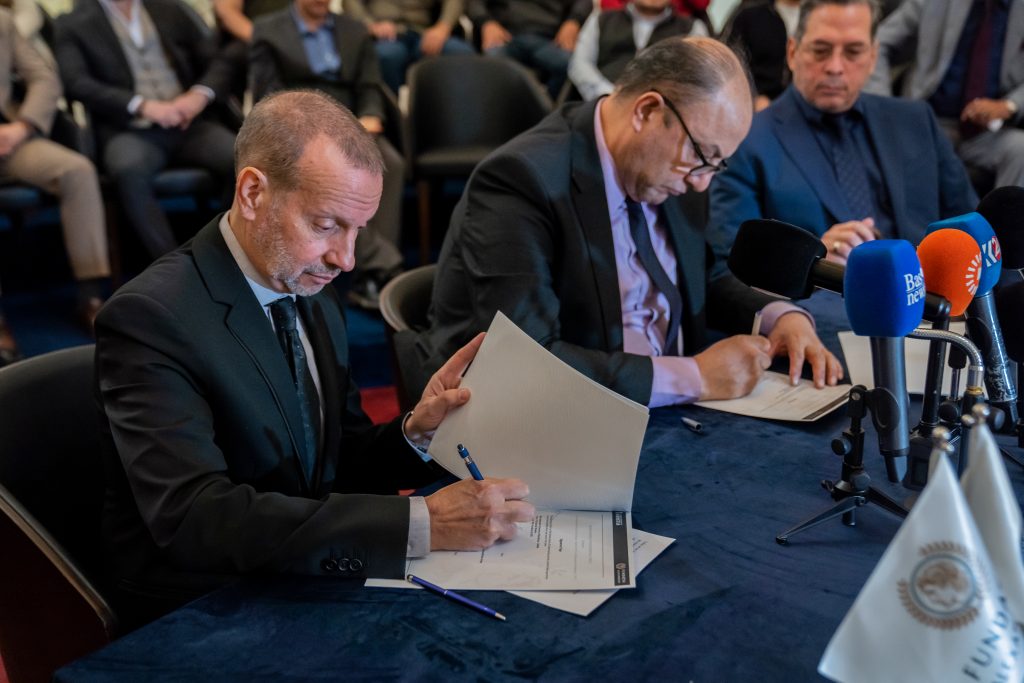 Local TV channels converged on the AUK Rotunda to capture footage of the signing of the memorandum of understanding (MoU) between the parties. The actual signing came after brief statements by AUK President Dr. Randall Rhodes, Alexandrion Foundation founder, president, and director Nawaf Salameh, and Nicholas Kass, Executive Director for International Corporate Affairs of Alexandrion. All speakers stressed that the Alexandrion Foundation would be offering internships and professional development to prepare AUK students for the increasingly competitive international labor market. Mr. Salameh commented on how it takes strength to go outside one’s country, improve one’s craft, and return ready to better conditions there. He told the story of his own life: leaving his native Syria in 1983 to study abroad in Romania, which set off a series of events culminating in his tremendous success. Mr. Kass spoke about the value of the internships to AUK’s students: “Our target is to expose students to the practicalities of life in the business world.” Mr. Kass impressed much of the crowd by making some of his statements in Kurdish.

Next on the agenda was an interview session between the Alexandrion executives and five students selected by AUK’s College of Business for internship consideration. Statements from Nicholas Kass shortly after the interviews showed he was very impressed by the conversations.

In the final part of the visit, the executives fielded questions from dozens of AUK students. The internships are supposed to last for six months, and, in response to student questions about what would happen thereafter, the executives clarified that successful interns could either work for the Alexandrion Group after graduation or pursue other interests after earning certificates of completion and references. Alexandrion’s portfolio is at this point quite diversified and includes green energy and hospitals, so their interns stand to be exposed to many fields. Regarding the availability of internship opportunities beyond the next year, Mr. Salameh expressed confidence the AUK-Alexandrion partnership will be a long-lasting one: “We are open.” One student asked: “What is the benefit for the Alexandrion Foundation?” In response, Mr. Kass explained that Alexandrion wants interns-turned-employees who can think globally and help the organization prosper wherever it may expand next: “We seek to become part of the fabric of the society to the extent that we can.” Tackling the same question, Mr. Salameh said he was seeking a “win-win,” in which Alexandrion interns would go back home and promote local economic development for their own benefit, thereby creating a better investment environment for large companies like his. 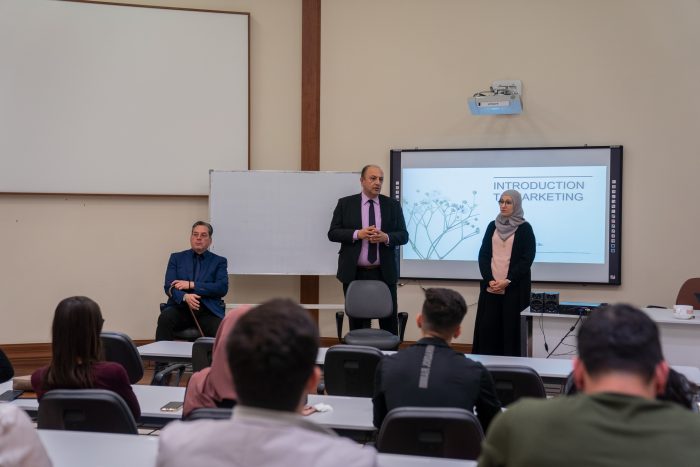