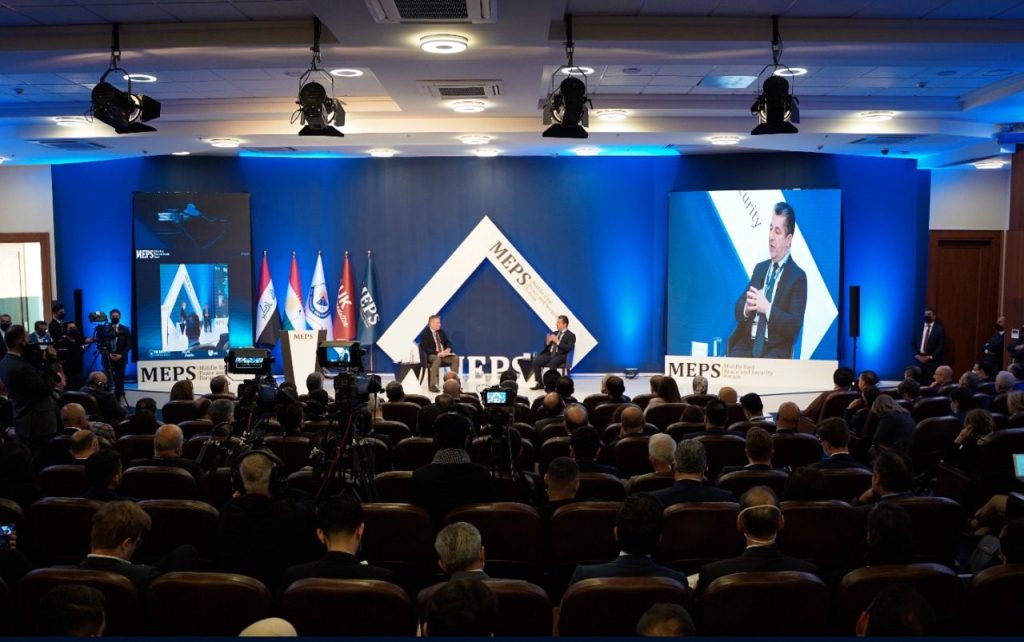 With the support of the AUK Foundation (AUKF), and its Chairwoman, Dr. Rania Majeed, the three-day MEPS Forum brought together an inclusive group of high-level decision-makers, scholars, analysts, and policy-makers to develop policy-relevant analyses that can address some of the region’s most pressing challenges. Support was also provided by the KAR Group, Qaiwan Group, Fastlink, and ArtinCrown Production.

As the host, The American University of Kurdistan (AUK) provided a platform for actionable policy recommendations, rigorous debate, and critical thinking, in addition to developing a space for inclusive dialogue between regional and international stakeholders, pursuant to the goal of securing a durable and lasting settlement to instability and conflict in the Middle East and North Africa.

“In 2018, Dr. Ranj Alaaldin (Brookings Institution) and I felt there was a need for a platform that could harness both local and international expertise to deliver a purpose-driven policy forum, one that focuses on transforming expertise and analysis into actionable policy recommendations and, most importantly, a space for collaboration and long-standing friendships.”, stated Dr. Honar Isa, Secretary of AUK’s Board of Trustees.” I am truly humbled by the participation at this year’s Forum and grateful that so many have made the journey to Kurdistan to debate the challenges facing the Middle East.” He added.

On Day One, more than ninety regional and international scholars, thought-leaders, and decision-makers were divided across three simultaneous workshops, providing a platform for rigorous debate and critical thinking, as well as actionable policy recommendations.

Day One featured three parallel workshops on governance and reform in Iraq. Two workshops focused on the theme of “Governance and Economic Reforms in Iraq: In Comparative Perspective with the Region.” The first workshop featured panel speakers and discussions by the Middle East Institute, the Iraq Policy Group, and the British Response Council, while the second featured the Crisis Response Council and the Carnegie Corporation of New York. The third workshop focused on “Humanitarian Challenges, Inclusive Governance and Climate-Related Risks in Iraq and the Middle East,” with contributions by the Iraqi Policy Group, the United States Institute of Peace, and the Crisis Response Council.

The second day began with keynote speeches by H.E. Nechirvan Barzani, President of Kurdistan Region, H.E. Dr. Barham Salih, President of Iraq, and H.E. Sayyid Ammar Al-Hakim from the Federal Republic of Iraq. These were followed by panel discussions addressing the Middle East’s most pressing challenges including: The Future of Iraq After Elections; Peace in the Middle East: Prospects for a Regional Security Architecture; and The Complexities of Peace: Conflict Resolution or a Durable Peace? The program included a Conversation with H.E. Masrour Barzani, Prime Minister of the Kurdistan Region of Iraq, Chairman of AUK’s Board of Trustees, chaired by Martin Chulov from The Guardian.

“There are deep-rooted problems in Iraq that politicians want to ignore, and the Iraqi constitution cannot stop the Iraqi PM from using force,” stated H.E. Masrour Barzani during the session. “Iraq still needs help, and that help could come from anyone,” he added.

Closing remarks were given by Dr. Randall Rhodes, President of the AUK. He noted: “By hosting the Middle East Peace and Security Forum, AUK is demonstrating once again its commitment to the economic, social and political advancement of Kurdistan Region and Iraq.”

The third and final day of MEPS 2021 included opening remarks by Dr. Honar Issa, Secretary to the Board of Trustees, AUK, along with panel discussions tackling Prosperity in Kurdistan and Iraq: Governance in the Modern Era; Western Disengagement in the Middle East: Implications and Challenges; Governance Amid Instability: Expectations and External Actors; and Armed Conflict and Climate-Related Security Risks: What Next?

The event complied with the Covid-19 health regulations of the Kurdistan Regional Government.