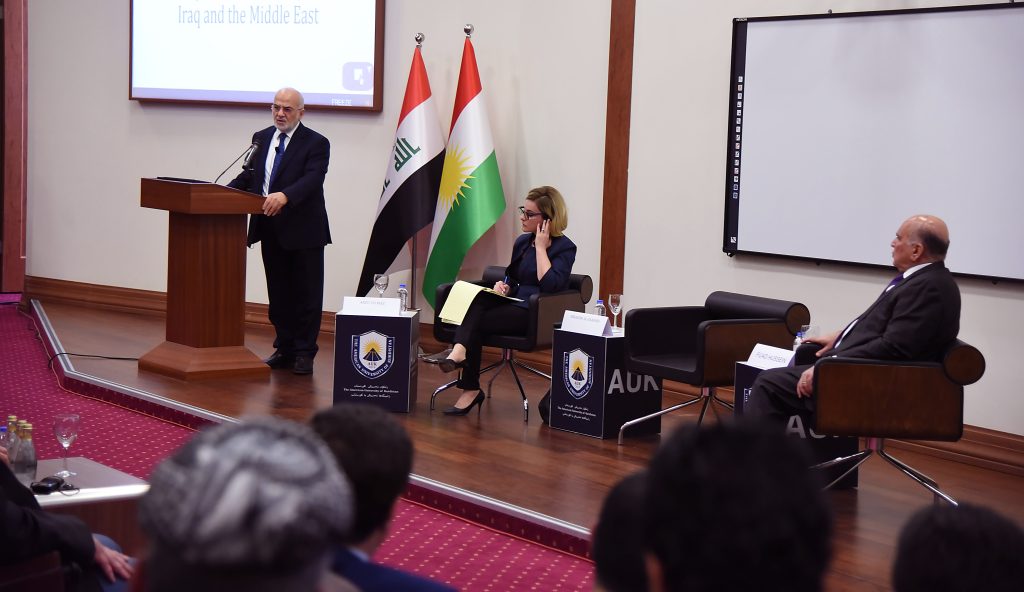 AUK president Dr. Michael Mulnix welcomed the panelists, calling the university a “safe haven” where leaders and academics can openly discuss “important and controversial issues.”  He added that the university encouraged its students to consider “all points of view.”

Atrushi expressed his disappointment over Baghdad’s response to the influx of refugees to his governorate: “In 2014, we received thousands of refugees from Nineveh and other provinces.  There were no visits from the central government.  There was no help from the government.”  He said the situation was exacerbated by the 2014 Iraqi federal budget, which cut all funding to the KRG.

“It is my honor to speak for the Kurdish case,” Al-Jaafari told a predominately Kurdish audience.  According to Al-Jaafari, Iraqi Shiites and Kurds were allies in their opposition to Saddam Hussein’s regime and collaborators for the 2005 Constitution of Iraq. “Under Saddam, we had a country of one man… Now we have achieved the goals of the people: elections, democracy.” He urged KRG residents not to dismiss the fledgeling government prematurely: “We have a federal democratic system in Iraq.  It needs time still, but the government of Iraq is inclusive.”  Although Al-Jaafari acknowledged the KRG’s right to a referendum, he concluded, “Iraq is for all Iraqis, not just Arabs or Kurds.”

Hussein agreed that the present administration in Baghdad was preferable to Saddam Hussein.  However, he argued, “It’s not enough to compare… When there are changes, there are expectations.  The Kurds and other groups in Kurdistan expected something else.”  He submitted that the reforms in Baghdad might be beneficial to Iraq but were  not relevant to Kurdistan.   On that point he expounded, saying, “The majority will always control the minority, and the minority will always be taken for granted.”

Al-Jaafari’s visit came less than two weeks after the KRG announced a referendum on independence to be held later this year.