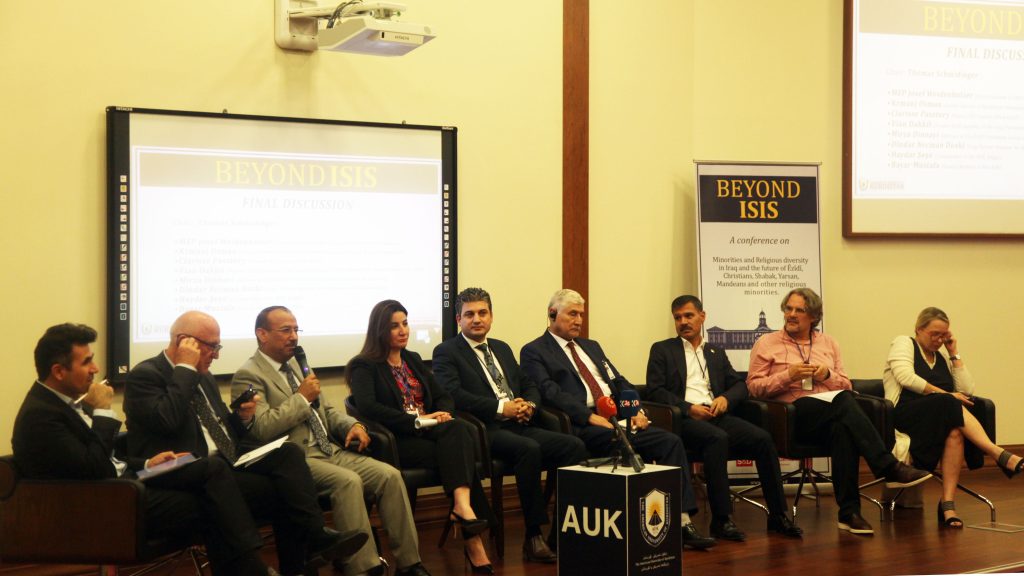 Duhok, Kurdistan Region of Iraq – October 13, 2018 – The American University of Kurdistan in collaboration with the Socialists and Democrats group of the European Parliament, hosted a two days conference on “Minorities and Religious Diversity in Kurdistan and Iraq”.

The conference started on the 12th of October in AUK, in the presence of Professor Josef Weidenholzer, Vice President of the Socialists and Democrats group of the European Parliament, and Dr. Jaafar Eminki, deputy secretary of Kurdistan’s Parliament.

AUK President, Ambassador John Menzies opened the event with a welcome speech and described Duhok as the most stable city in the Middle East “The Duhok region has about 1.5 million native people, and those one million and a half received over seven hundred refugees when things went bad. This shows the good will of the people of this city, and this place has proven extremely friendly to all the people who came here! So I’m very happy to be a part of this community! It’s an incredible place and it is as I can say the bedrock of stability in the Middle East!” Stated President of AUK “There is no place more stable in the middle east, than Duhok!” he added.

In his speech, Professor Josef Weidenholzer of the Socialists & Democrats Group of the European Parliament stated “I am very happy to be here, and I’m very honored to be in this place.” Said Prof. Weidenholzer “To be here in this very place, and think of how we can learn from this, is a very challenging act.” He added.

The event was attended by parliament members, minority group representatives of Christians, Ezidis, Mandeans and others. “This is a very important topic to discuss. The minorities’ subject is always an essential topic in Kurdistan Parliament and Government. In this region, the people decided on co-existence! There is no majority and minority anymore.” Stated Deputy Secretary of Kurdistan’s Parliament, Dr. Jaafar Eminki.

The first day of the conference has been wrapped after a closed roundtable discussion with the representatives of the minorities’ groups, in the presence of AUK’s President, Vice President of S&D of EU Parliament and the Deputy Secretary of Kurdistan’s Parliament.

On October 13th, five panels have taken place throughout the day and over one hundred-fifty guests were present. The panels discussed the religious diversity of Iraq and the future of religious minorities in the region under the shade of history.

In the Christian Minorities in Iraq panel, highlights were put on the political pressure and persecution on the Iraqi Christians who lived in big cities that made them abandon and forget their mother language for Arabic “They, nevertheless, still believe they are not Arabs and have, therefore, kept their mother tongue Syriac as the main language of their religious rituals.” said Archimandrite Emanuel Youkhana of CAPNI, Duhok, one of the panelists “Our demography is only in Ninava and Kurdistan Region, I see no reasons of the term ‘Iraqi Christians’ since we only live in specific areas of the country” he added.

One of the panels about “Ezidi after the Ferman”, included Former Ezidi Iraqi Parliament member Vian Dakhil, who highlighted the last genocidal massacre against Ezidi people by the Islamic State on 2014 “We are in continuous contact with the Iraqi Government and Kurdistan Regional Government to ensure the wellbeing of the Ezidi people in the conflict areas.” She said during the panel.

How can Europe support religious freedom, tolerance and reconstruction in Iraq, and how Iraq can cooperate, was the main topic of the final Discussion, before wrapping the event.

The S&D Group is the leading centre-left political group in the European Parliament and the second largest, with 189 members from all 28 EU countries. The Group stands for an inclusive European society based on principles of freedom, equality, solidarity, diversity and fairness.