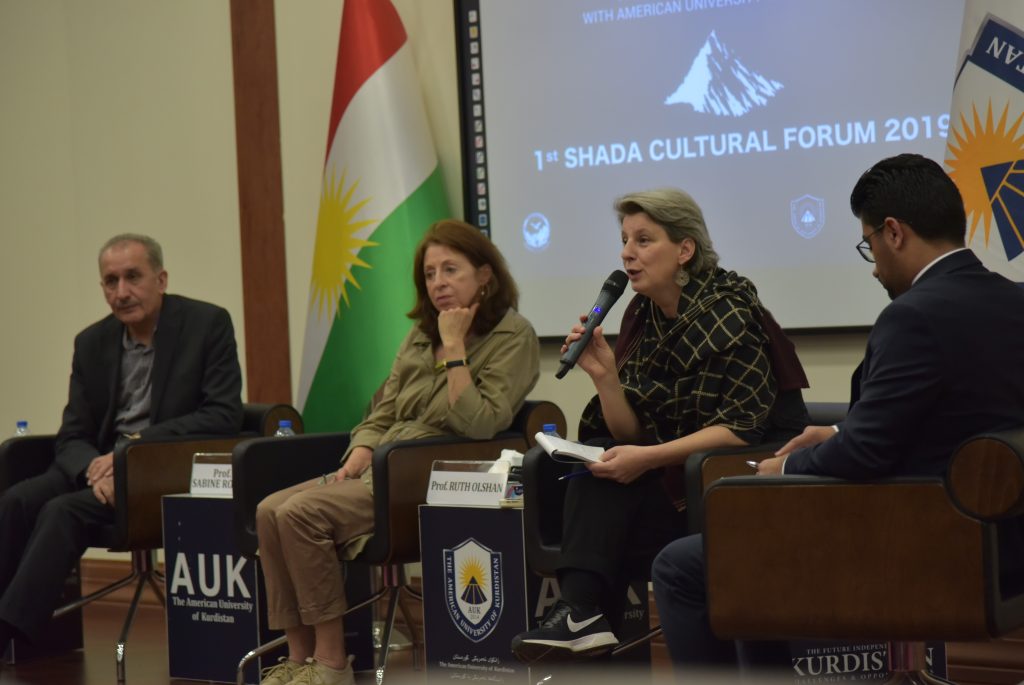 Duhok, Kurdistan Region of Iraq – April 18th, 2019 – The American University of Kurdistan hosted  1st Shada Cultural Forum, organized by the Directorate General of Culture and Youth in Duhok and Kania Spi organization in collaboration with AUK, and support from the Governorate of Duhok.

On the first day of the forum at the American University of Kurdistan, prominent cultural scholars and artists came together on two panels discussing Culture and Identity, as well as Culture and Social Transformation.

The forum was attended by the Governor of Duhok Mr. Farhad Atrushi, the President of the American University of Kurdistan Dr. John K Menzies, and Director General of Culture and Arts in Duhok Mr. Eyub Ramadhan, alongside many prominent cultural affairs scholars, artists and journalists.

“Culture and Social Transformation” was the title of the first panel, presented by Kurdish Author Dr. Fadhil Omar who highlighted the imbalance between matristic and intellectual development in the Middle East societies. Filmmaker Prof. Ruth Olshan focused on film as a part of peacemaking process while Journalist Prof. Sabine Rollberg spoke about “Culture is tomorrow’s social work”.

The second panel about “Culture and Identity”, has been presented by both prominent Kurdish Musicians Dr. Dalshad Mohammed Said and Mr. Adnan Karim, as well as the director of the French Institute in Erbil Mr. Paul Leandri, highlighting music and its relation to culture and the identity of a nation.

“It has been a pleasure for us to bring all these prominent cultural affairs scholars together at first Shada’s cultural forum in AUK” said Bina Qeredaxi, AUK’s Communications Manager “It’s a part of our duty to raise awareness about culture and arts in our society and bring people with high profiles and academic backgrounds to discuss these important topics.” She added.

On the second day of the forum, Hiner Saleem’s “Who Killed Lady Winsley?” film was screened in the halls of Cinemax at Duhok mall, attended by a large number of audience and followed by a question and answer session with the filmmaker who was present in the screening.